None of my usual reference sources has any detail about this library, beyond the opening date, and the note that there were two benefactors: H. H. France-Hayhurst and Carnegie.

Current status: Closed, assume after library services moved to a new home in 2012.

The site was gifted to the town by William Meath Baker (the Baker family owned a large pottery business in Fenton, and the street the library is on, is called Baker Street). The architect was F.R. Lawson.

Current status: Closed as a library in 2011, but see article linked below – plans are in hand to reopen. “Urban Vision’s plans also involve creating a community gallery, a specialist ‘built environment’ library, five units to be let out to small businesses and two meeting rooms.”

Yes, during our holiday in the Peak District in August 2017. The library was still closed, but looks to be in good condition, and I was heartened to find the newspaper article listed below, which hints of a positive future.

The original library opened in 1893 and was the gift of a local industrialist, Alderman T. Wrighton, MP. An extension was planned and in 1903, an offer of £1,000 was made by Andrew Carnegie, increased to £1,500 in 1904. This grant was obtained through the offices of Alderman William Whitwell, who was Carnegie’s predecessor in the Presidency of the Iron & Steel Institute. He was also the donor of the land for the extension, which took the form of a children’s library, and was opened in February 1905.

Photo credit: Mick Garratt and licensed for reuse under this Creative Commons Licence

Opened in 1909 on the site of the old Temperance Hall and Mechanics Institute on Stanley Street. The architect was Arthur John Hope (from the firm Bradshaw Gass and Hope).

Current status: Closed in 2020 when plans were made to relocate library services to the Town Hall. The article on the plans below notes: “The restrictive covenant on the library also prevents the land from being used for anything other than a free public library for the people of Tyldesley……… but the council could try and convince the beneficiary to allow alternative uses, or apply to the Land’s Tribunal to remove or change the covenant.” (2020) This is the first restrictive covenant I’ve seen on a library in the UK – although they are more common in other countries. 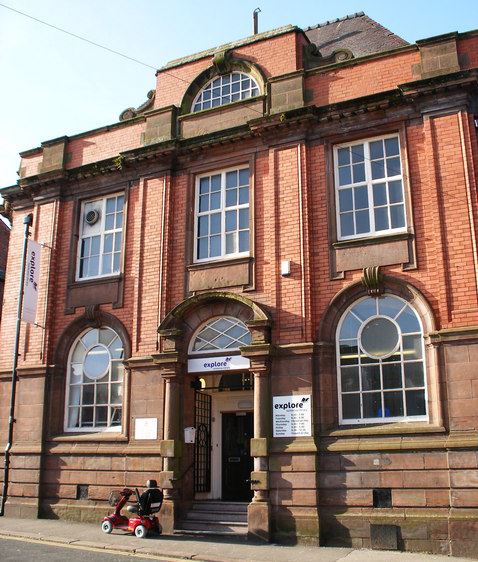 Photo credit: SMJ and licensed for reuse under this Creative Commons Licence

The foundation stone was laid by James Servant, on 14 December 1903. The achitect was EH Ballan.

A rather damning report into public services in Thorne dated 1980 said that the library had problems of structural deficiency, and was not able to make use of the upper floor for public service. It went on to say the staff accommodation was inadequate, and the building was expensive to heat and maintain, but there were no plans to improve library provision in the town. 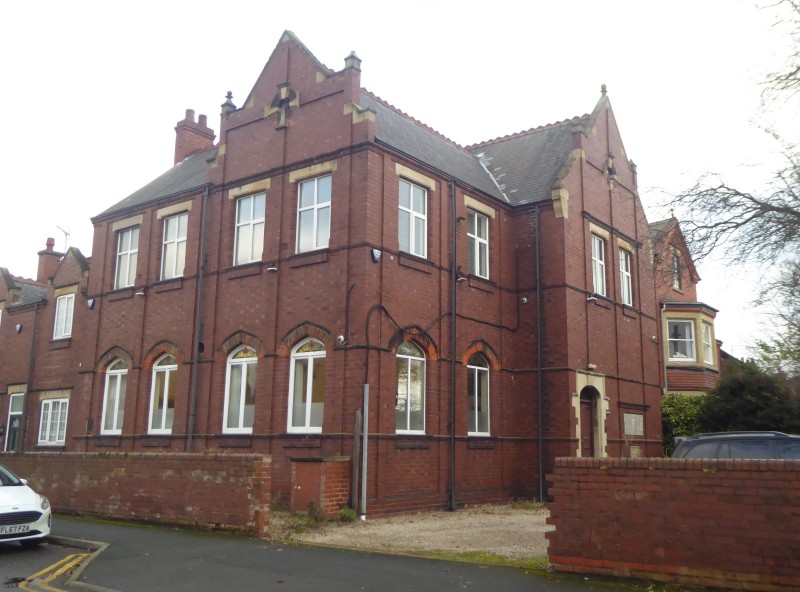 When we visited, the library had been sold, and work was being done inside, but no clues as to its future use. And the old name plaque (seen below) has been covered by a board.

Photo credit: Richard Croft and licensed for reuse under this Creative Commons Licence 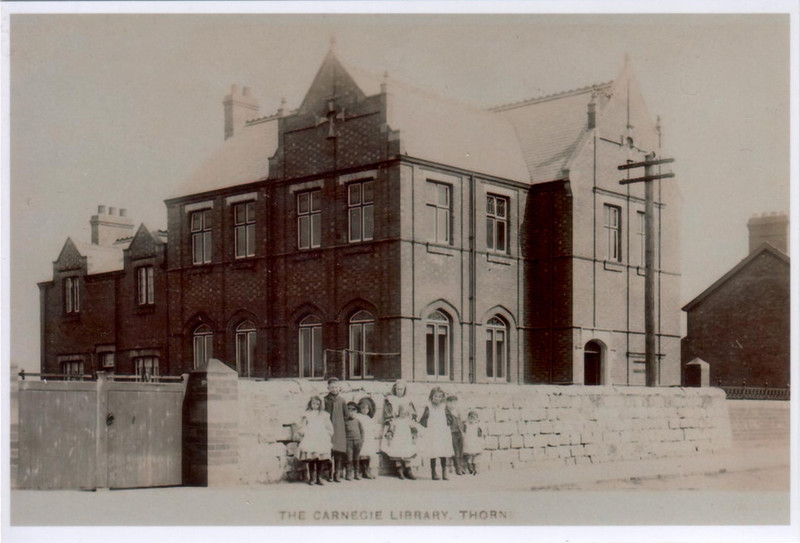 Yes, during a holiday in Lincolnshire, November 2019. We visited the old building, and then went to the new library, which is colocated in a health centre, about 100m down the road. We were able to see more photos of the building, but limited information in the local history collection. More research needed! James Servant was clearly a local public official, but so far I haven’t discovered his actual role.

Current status: Closed in 2017. Replaced by a new library in a new development relatively close by. Looking for alternative tenants, but when I drove past in November 2017, no new purpose had been found for this building. 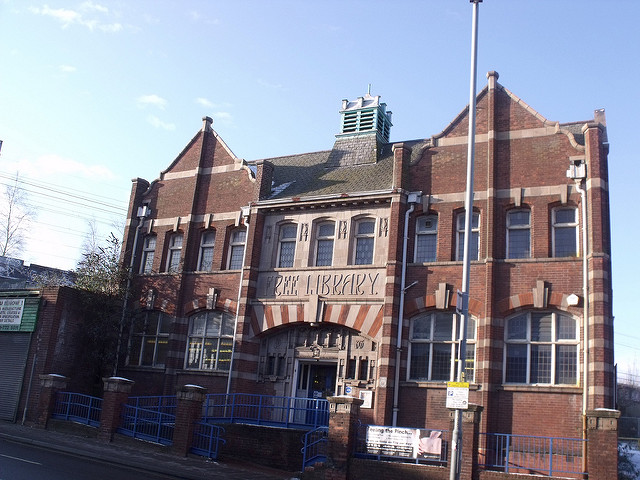 Nothing in my collection yet, but the image below appears in wikimedia: 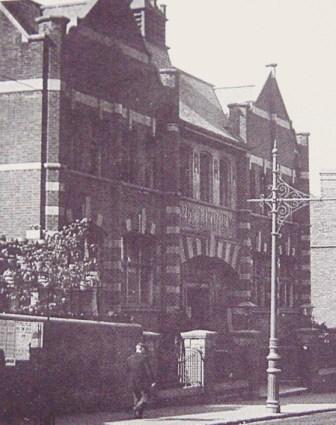 Drove past in November 2017. Just managed a snatched photo of the front door.

Designed by the borough surveyor to Brierley Hill, Lewis Harper and built by CA Horton. The Technical Institute and Library was designed to accommodate the two functions of a public, free library and a technical institute to train the many apprentices in the local glass industry. Carnegie gave £2,000 towards the library building in 1901 and the rest of the cost was borne by Brierley Hill Urban District Council. The foundation stone was laid in April 1903, and the building opened in 1904.

The brick and terracotta used were locally produced by the Ketley Brick Company, and the sculptures of Learning and Art were modelled by Arthur Gibbons and Albert Oakden who were, respectively, headmaster and assistant of the School of Art.

The building continued to operate as a technical institute for the glass industry throughout the C20 but the Moor Street Glass centre closed in 2009.

Current status: Library closed in 1970. It housed offices in 2016. Current status unknown – but I think from streetview images of 5 Moor Street, Brierley Hill, Dudley, DY5 3EP, the building may be unoccupied. The Shelf Life project (link below) lists it as a building ‘at risk’.

Situated on Cardigan Road, this library was built in 1926. The library cost £8,338 to build, a large amount of this came from the Carnegie Trust. It is a simlar design to the libraries in Bramley and Compton Road.

The architect was Gilbert Burdett Howcroft, and the building was designed in the Neo-Georgian style. Note on the architect: Gilbert Burdett Howcroft was a lieutenant in the First World War and colonel in the Second World War, and designed the Grade II war memorial obelisk on the top of Alderman’s Hill, Saddleworth. He was later President of the Manchester Society of Architects in 1953-5.

In 1903 active local Members of the Council privately approached Andrew Carnegie. They succeeded in securing from him a donation of £7,000 provided that the Council raised a 1d rate (the maximum local tax then permitted by law to be used for public libraries) which produced an operating budget of £610 per annum.

The architect was a local man: William Egerton, who designed a building in the ‘Free Renaissance’ style. He worked with local craftspeople including builders F. Spencer & Son (of Riverdale Road), the Thames Steam Saw Mills (a forge on West Street) and the Crittal Window Factory in Sidcup.

The new Erith Library was opened in 1906 at Walnut Tree Road, and an early local guide proudly states that it contained “lending and reference libraries, news, magazines and children’s rooms, and lecture, committee and filing rooms. The first librarian, who lived in accommodation on the top floor, was William Barton Young, who was killed in action in WWI.

The library has been re-modelled internally many times, with staircases blocked up and new ones inserted. A museum was created where the librarians rooms were – and remained until the library closed. The collection was distributed among museums in Bexley. The last complete re-fit was in 2000.

Current status: Closed in 2009. Remained empty until 2018, when the Erith Exchange project started (see link below). Many original features remain (and will be retained) including stained glass, mosaic, marble columns, the book lift, and amazing turquoise and white tiled toilets. (2018). 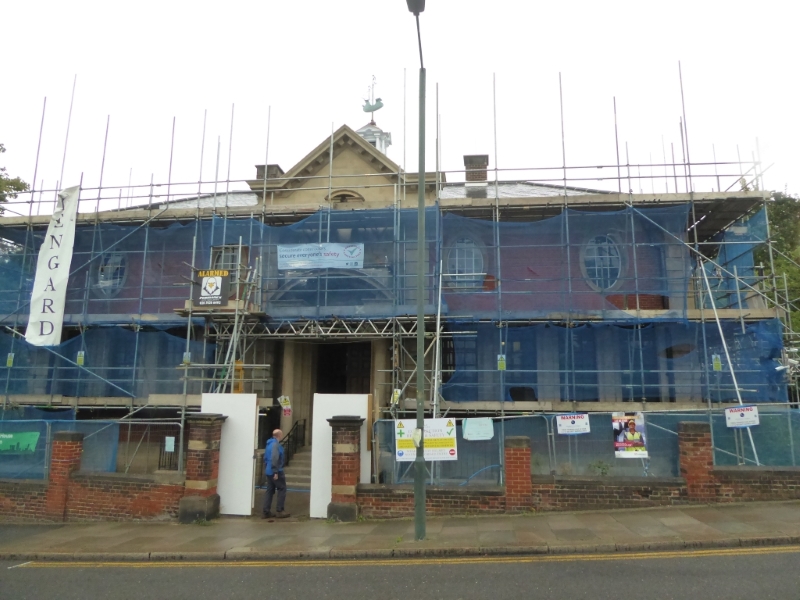 There is a mosaic in the entrance hall, which portrays Erith’s coat of arms (in 1906) and reads: ‘Labour overcomes all things’. It also includes red pike (fish), inspired by the coat of arms of the De Luci family –  influential Norman landowners. It was covered over for protection during the restoration – so I’ll have to visit again!

Yes, in 2006 – before it closed completely, although it wasn’t open the day we visited. And again on Open House weekend, September 2018. Very interesting to see the building with restoration underway, and hear about the team’s plans. There will be a mixture of artists studios and community space, plus a cafe/bar. The focus will be on bringing people together and stimulating creativity – with community involvement at the heart.  I think Carnegie would have approved.

Web links and other references: 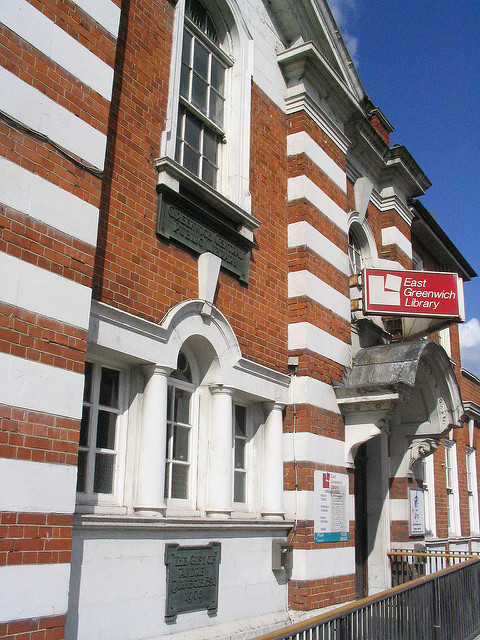